Having difficulty creating a professional Contractor Agreement? Our intuitive forms ask the right questions to quickly generate documents for you at a fraction of the cost. We make it easy to create expertly customized forms like the Contractor Agreement. 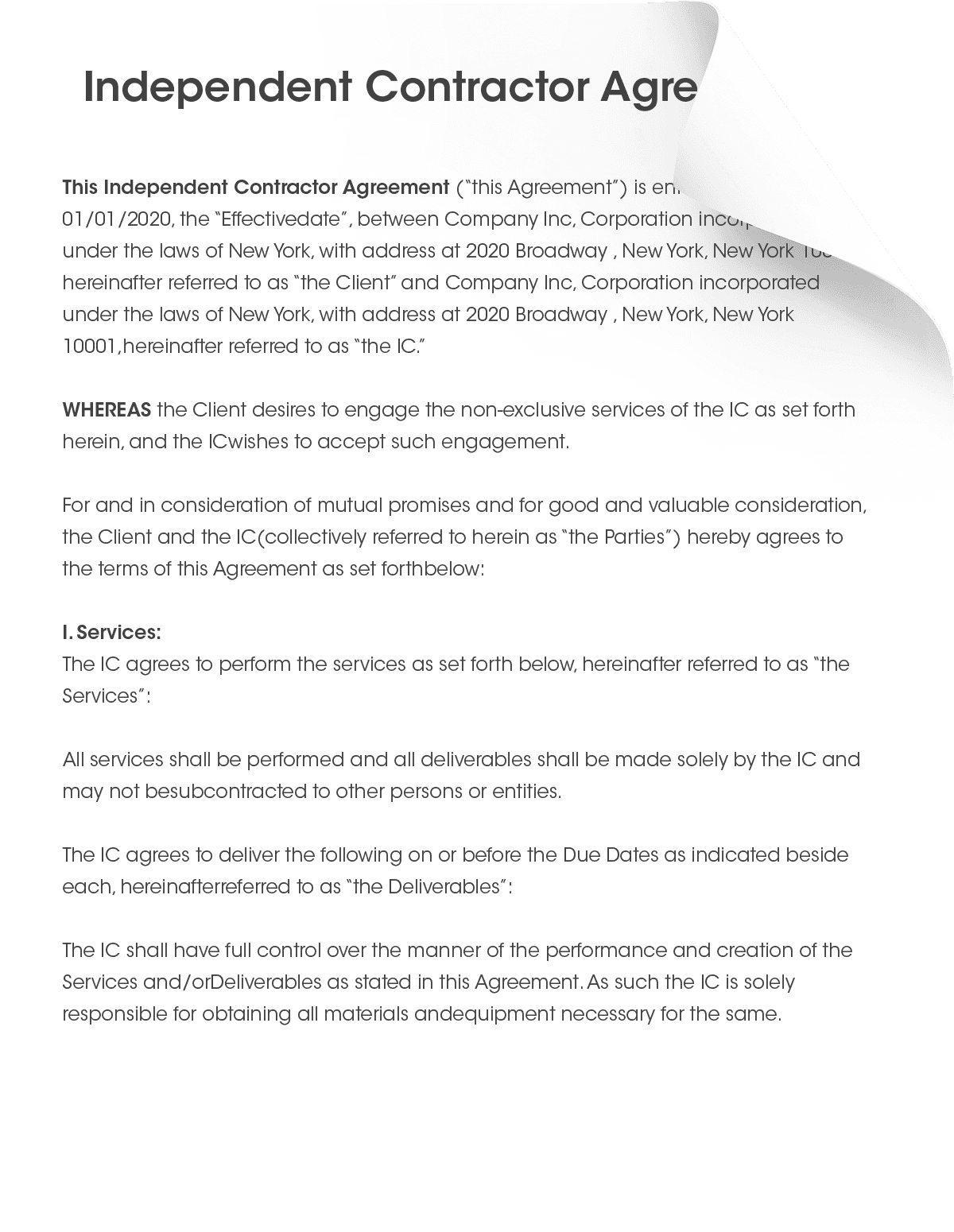 What is a Contractor Agreement?

What is an Independent Contractor?

An Independent Contractor is someone who offers services or products to another in exchange for payment. It can be a person or a company. Many companies prefer hiring independent contractors because a lot of extra responsibilities, not to mention expenses, are attached to hiring an employee.

Why is it important to know the difference between an Independent Contractor and an Employee?

It’s a bit complicated so you will need some patience in following me. The law protects employees by setting certain standards in employment. (Things like minimum wage, overtime pay, annual leaves, FICA and other benefits.) For employers, not complying with those will mean liability and other penalties, for many companies the liabilities were in the hundreds of thousands or even millions of dollars. With an Independent contractor, employers would not have to comply with those things. This is one of the main advantages hiring an independent contractor. They will save a lot.

Sadly, many have used this as way to dodge having to give those benefits to workers who would otherwise be employees. This is what the government is trying to stop. So, now an employee is not just an employee when the company says so. The government, and the courts, take into consideration many factors other than what the company says. Now, the IRS can look at a worker and say, based on our criteria this worker is an employee who should have been accorded the benefits for an employee from the time he was hired. That’s where the liability kicks in because if an employer treats someone as an independent contractor, they won’t be complying with those things. And unfortunately, “honest mistake” is not an excuse.

Which brings us to our point. It’s important to know the difference because there is no fixed or objective way to determine whether someone is an employee vs an independent contractor. There is no form to fill out or box to tick to make a worker an Independent Contractor and not an employee. The determination will depend on several factors, and what’s worse is: you can’t ever be sure that your classification is correct until the IRS or other government agencies make that determination for you. Thus, if you know the difference between  the two types of works, you have a higher chance of being able to classify your worker correctly, which in turn lowers the possibility of incurring liability from misclassification in the first place.

So, How do you tell the difference?

As we mentioned above, there is no definitive answer, but it would help if you knew the factors or indicators that say someone is an employee and NOT an independent contractor.

First off, there are 3 main criteria:

What does that mean? What is integral to the core business? Well, it’s very vague but think of it as any work that is necessary for the company to carry out its main purpose. Here’s an exercise: Think of Office A, a business  that sees clients everyday. A good way to check if a person is doing work that is integral to core business of Office A would be to ask, if everyone who doing that person’s job would be absent that day, would that office need to close or would it still be able to deliver services to the clients it will see that day? If the office will have to close for the day, then that person’s job is very likely to be integral to the core. For example, if all of the sanitation personal happen to be absent one day, Office A would probably still go on with business as usual. It would be a bit more difficult, but it would be possible, which means the job of the sanitation personnel is not likely to be integral to the core business. Unless of course Office A’s business is sanitation in which case it will have to close for the day, then in that case the sanitation personnel are doing integral work.

There are other factors that are considered indicative of employee status rather than independent contract. Generally you can think of it as things that show that the worker is entirely dependent on the company for his income.

With all that said, you should not shy away from hiring an Independent contractor for fear for misclassification and its consequences. There are real advantages in hiring Independent contractors. For example, real independent contractors invest in their trade, so most likely they will be more capable and more seasoned in the job you will hire them to do. From a business standpoint, it’s usually smarter to hire and Independent Contractor. You just need to make sure you are not exercising control as mentioned earlier over the worker, or treating him or her as you would your employee.

Why do you need to use a Contractor Agreement?

If having a contract that says “Contractor Agreement” is not an assurance that your independent contractor will be classified by the government as such, then why bother with it? While it will not be the sole determining factor, it will help you prove he or she is an independent contractor. Also, whether you are an Independent Contractor or the “hirer”, having a Contractor Agreement will enable you (if not force you) to specify the terms and condition of your engagement. This will save you from more trouble than you think. More on this later.

When do you need to use a Contractor Agreement?

Are there deadlines or times for when the form is needed?

No, there are no deadlines here. In fact you can actually have one signed while you’re already in the middle of the job. Of course, in practice you will want to have this done as early as possible: preferably before anyone starts working. And especially, before any conflict arises, because then, it will be almost impossible to have it signed without compromising the interests of one party or the other.

What are the main things that go on this form?

Apart from the hirer and the Independent Contractor’s details, the Contractor Agreement should have a combination of the following:

The following are some other clauses that are not necessary but are great to have in your Independent Contractor agreements are:

Not having a Contractor Agreement.

Not having a Contractor Agreement with your independent contractor is just as bad as buying an item based off of a single photo. Sure, it’s possible that it will be as good as it looks. But more often than not, it won’t be. The same will be true for the work or service you will get when you don’t have a contract. If he or she does not deliver or perform as good as what you had in mind, you won’t have anything to fall back on. The same goes for someone who works as an Independent Contractor without a contract. You might be committing to something in your head but the other party may be expecting something else. Without a contract, you’ll be hard pressed to show that that was not what was agreed upon.

Sometimes not specifying the terms of the engagement is just as bad as not having an agreement altogether. Attention needs to be paid to make sure that both parties are agreeing to the same thing. That includes not only the final output but also the details that will go before you get to the final output. Things like details about the final output that are important, deadline, what happen if the deadlines are not met, if the final output is subject to approval, how many revisions etc. Both parties need to sit down and make sure they agree on all these terms. It does not need to be a long drawn out meeting. Find out the things that are not negotiable and then compromise on those that are less important.

The opposite is also bad. Specifying all the details you want in the final product is fine, so is putting in a lot of details regarding payment, deadlines and other. But if you are the one hiring an independent contractor, make sure you are not specifying so much that it looks like you have control on things connected to how the person will do the job, like prescribing tools, work hours, requiring attendance etc. That’s when he or she starts to seem like an employee.

Not specifying ownership of Intellectual Property created in the course of the engagement.

This is a very common problem when hiring Independent contractors, especially when it comes to copyright. Most businesses have independent contractors for copyrightable materials like photos, graphic designs, most things you will find on the websites, most if not the entire ad. According to the law, the author becomes the owner of the copyrightable material from the time it is created. As an exception, if this is done by and employee and it is in his job description to do so, the company will own it. But in most other cases, it will be the author, writer or creator who owns it. Therein lies the problem. Imagine paying for the creation of a website but having to keep on paying to be able to use it. So, if you are engaging an Independent Contractor for work that involves intellectual property, make sure you have an IP assignment clause and that the Independent contractor is both aware of and consenting to it.

As we’ve discussed above, this comes from treating (and paying) a worker as an independent contractor when the government considers or classifies that worker as an employee. Having the Contractor Agreement will not, by itself, control the classification. If the worker should be and employee, it would be best to hire them as such.

Do I need a lawyer, accountant or notary to help me?

Not really. For as long as you take the time to think through what you need and the necessary details for the Contractor Agreement and make sure both parties are on the same page about all of them, you will do just fine.

Why use our Contractor Agreement Generator?

The key to a good Contractor Agreement is being able to include and agree on all the things that matter. Our independent contractor agreement generator will help you do this by taking you through the important stuff including those you may not have even been thinking of. This way, there is a significantly lower chance (if not zero chance) that you will miss something.