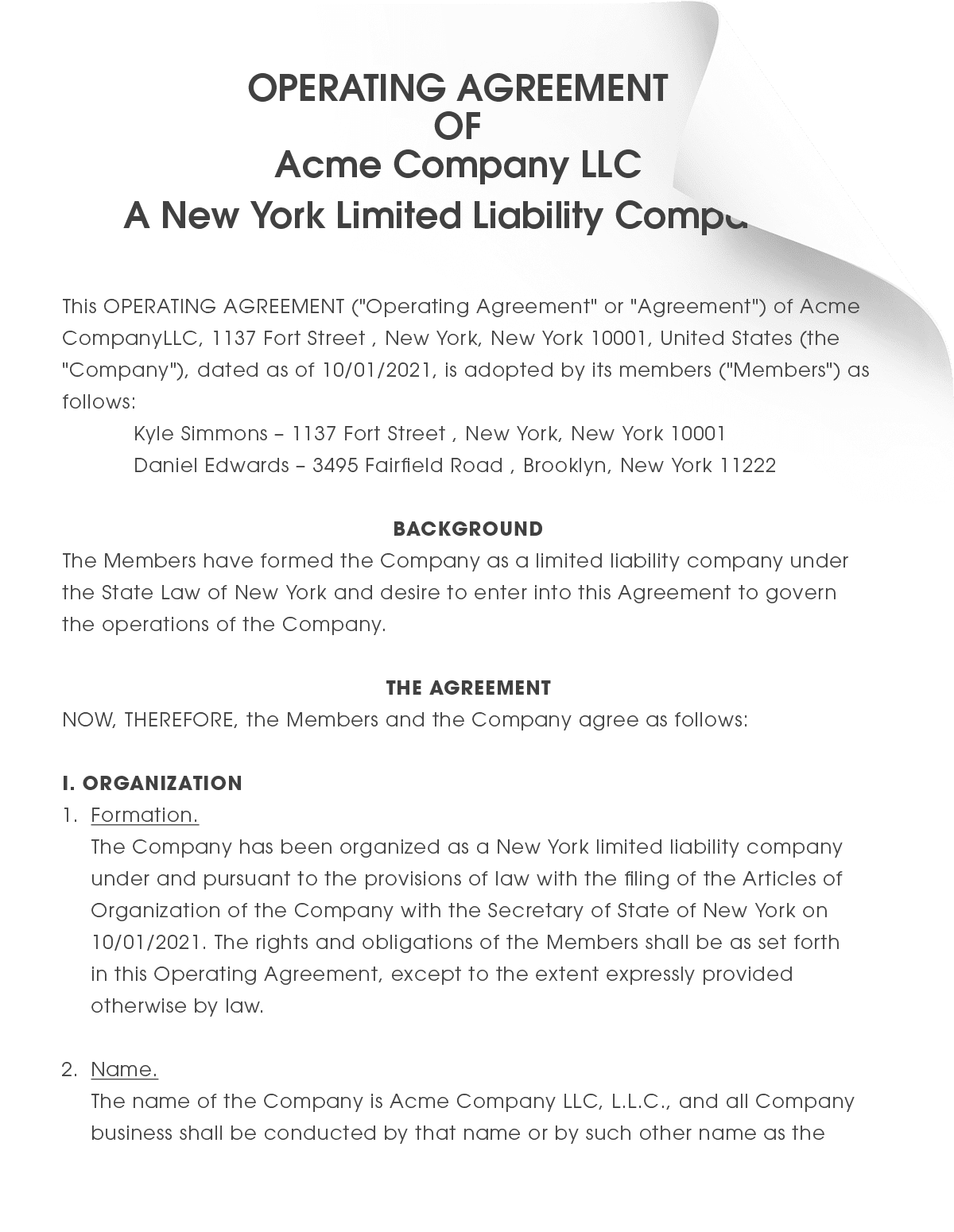 What is an LLC Operating Agreement?

An Operating Agreement is an agreement between all of the members of the LLC. It defines the set of rules according to which the company will be run. It also shows how the company is organized, who the members are and how much each of them own in the company.

It depends on which state you are organized in. Most states don’t require LLCs to have an Operating Agreement. But if you are in California, Delaware, Maine, Missouri or New York, then yes, it is required. What each of those 5 states require in terms of form or substance vary. Some require more and some less. Some allow oral operating agreements while others require them to be written, signed and executed at a given time. Below is a quick overview. (However, if you are organizing in those states, it’s always best to consult the state rules to make sure you’re not missing anything.)

Why do you need to use LLC Operating Agreement?

For those who are organized in states that require an Operating Agreement, not having one puts you in breach of the state law. It’s true that you may get away with not having one when things are going smoothly. However, the moment the company runs into any legal action or audit, the members’ personal assets are put at risk. This is because failure to comply with the state rules may put your LLC in danger of not being recognized as a separate entity from its members, which is probably the exact reason why you formed an LLC in the first place.

For those who are organized in state where an operating agreement is not required, there are several reasons it’s advisable to have one anyway:

When and where do I file my LLC Operating Agreement?

Operating agreements, even when they are required, are not filed with the state. But take note that Delaware and Maine require them to be executed around the time you file your LLC documents.

For those states that require operating agreements but don’t specify when you’re supposed to have them, you can execute them any time. The same goes for those in states that don’t require one. In either case, you’ll want to have them before any audit or legal actions comes up. To be safe, just do them as soon as practicable.

Do I need to use a lawyer, accountant or notary to help me?

Input from a lawyer always helps when it comes to agreements, however, if you take the time to understand what your company needs and configure the operating agreement according to that specifically, you will do just fine.

What information should be in my Operating Agreement?

The operating agreement should have all the rules relevant to how the company will run. Specifically it should include:

What is the easiest way to create an LLC Operating Agreement?

Operating agreements are the complete set of rules on how your company runs. This means that virtually everything you can do within your company, how you can do them, what will be required of you and what it will be required to give you will be defined in there. If you do not configure those rules then default rules will apply to you which could potentially be disastrous. Imagine having 2 other co-members who contributed 1% each while you contributed 98%. Some default rules say that every member gets one vote each. That would mean that the 2 of them, despite having minimal contribution can defeat your vote even if you have the most at stake. This is why the best way to do your operating agreement is going through each provision and weighing which option will work best for your company.

Why use our LLC Operating Agreement generator?

Our form generator makes the whole process easier and foolproof. We’ll take you through each item that needs or allows configuration and help you make the right choice for your company. By taking you through each item one-by-one, we also minimize the possibility of you missing anything important. We’ll point out where you need to make choices and all you have to do is think about what will work for your company.